The interface between the physical world and the digital world becomes richer and more complex as the machines themselves improve. What once was only encoded by punchcards gave way to keyboards, then joysticks and light pens and mouses (mice? not sure if the biological plural applies) and haptic interfaces. But what if your entire physical environment could be the interface to the digital world? Enter SixthSense computing.


SixthSense is an Open Source project. The current device costs about $350 to build, and instructions on making your own will soon be made available on the SixthSense site.
Posted by Ed at 6/30/2011 04:35:00 PM No comments:
Email ThisBlogThis!Share to TwitterShare to FacebookShare to Pinterest

Posted by Ed at 6/23/2011 03:25:00 AM No comments:
Email ThisBlogThis!Share to TwitterShare to FacebookShare to Pinterest

space for all of us

At the core of their debate is a single issue: heavy lift versus propellant depots. There are advantages and disadvantages of both approaches. However, their debate is about tactics and objectives and loses the forest in the trees.

What's missing in the debate is Vision. Now, to be sure, Bob Zubrin has a vision, an extremely detailed vision of landing a man on Mars, fast. Rand Simberg has a vision, too, of the commercial market driving down launch prices for all missions. Others have different visions - Paul Spudis wants to extract Hydrogen and Oxygen from lunar ice trapped in perma-dark craters from a base on the Moon's South pole, for instance.

Now, I'd wager that most of the people who care enough about space to (in some cases) make a living by writing about space, would want to go up there themselves. Each would have their own particular reasons for wanting to go. They all (not just the three above) have different destinations in mind, and different ideas about what to do once there. Each naturally tries to steer the debate towards whatever they think will accomplish their personal goals.

These visions are all worthy ideas, technically possible with today's technology, and all suffering from a lack of long-range Vision. Each group is only looking at the next decade or so. This is understandable, as after all we are debating current space policy, arguing about what to do next and how best to go about it.

The goal is the settlement of space.

That implies large numbers of people living and working and raising children off the Earth. It implies not only cheap launch to orbit, but a lot of other challenges to be solved, technological and otherwise.

I started writing this blog post on May 22nd, and nine days later this keynote speech by Jeff Greason at the ISDC appeared at MoonAndBack, laying out much of what I'm talking about here in detail, in particular the difference between the tactics and objectives being discussed in the PJMedia space debate and the Goal and Strategy. Here's the slide where he lays it all out, without getting into the minutae of the tactics: 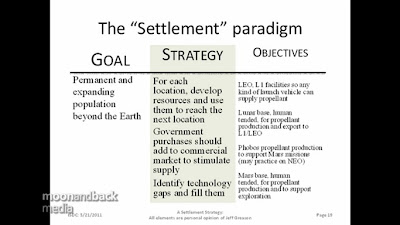 It's a pretty good starting point for discussion purposes, and as Greason says it is a strategy, not necessarily the path to be taken but in a better general direction than the status quo. And for once the Goal of all this effort - the human settlement of space - is clearly stated.

For decades the US government has been living beyond its means, and the time is rapidly approaching when government will have no choice but to cut expenditures and restructure. As Jeff Greason mentioned in his ISDC speech, if in ten years NASA has no more progress than the last ten years, NASA itself could be greatly diminished. The bottom line is that NASA's budget will not increase in the coming years and may even decrease slightly, as a most-likely scenario.

NASA is going to have to change the way it does business. Greason mentioned that it is going to have to assist in developing technologies which will result in products that have other customers besides NASA in the future - and then get out of the way and move on to the next thing while private companies fill in behind them.

However, a more fundamental restructuring of NASA may be necessary to implement a Greason-esque strategy. Einstein asserted that doing the same thing over and over, expecting different results, was insanity. The same NASA centers being run the same way using the same risk-averse methods that have ossified the agency over the last several decades will not give different results. The Augustine commission recommended changing all NASA centers into Federally-Funded Research and Development Centers, like JPL is currently, and that is a good start.

However, the change at NASA might have to go even deeper than that. One way of reducing NASA's budget, without laying off a bunch of voters, is to reduce NASA to core competencies and transfer those non-core parts to another agency.

In the Winter 2011 edition of the New Atlantis, James C. Bennett proposed a United States Space Guard modeled after the Coast Guard. In his essay Bennett points out that there are many space-related functions in government outside of NASA, in agencies in which these functions are not core competencies: the Department of Transportation regulates suborbital flight; the Air Force tracks orbital debris; NASA has infrastructure operations that are not related to R&D, exploration, or space science; the Department of Commerce operates weather satellites.

This idea has merit. It allows several departments to reduce their budgets (most importantly for PR purposes in the Department of Defense) without losing capability. It establishes a central civilian agency associated with the routine use of space, well inside the envelope that it is NASA's job to push. It allows NASA to ignore the routine aspects of its current operations, and instead to focus on cutting-edge research and development, exploration, and space science exclusively.

Now, the creation of yet another new government department is not going to be an easy sell in a time of budget cutting. It won't simply be a matter of money taken from the various agencies and all transferred to the new Space Guard, all done on paper with zero net spending reduction. Further budget reductions can reasonably be expected in most government departments, including Defense and NASA.

The restructuring of NASA (and other non-military government space operations) and the implementation of the Greason strategy or one like it are a great start. However, there is still one crucial element needed to make the settlement of space a reality.

there's gold in them thar hills

Mark Twain said "Buy land, they're not making it anymore". The idea of private individuals or corporations owning land off the Earth - on the moon or other celestial bodies - is crucial to settlement. When a corporation is setting up a mining operation to produce propellant on the moon from lunar ice, it is critical to the business plan that the company has the legal right to own the propellant it produces. If a company is mining asteroid (6178) 1986 DA, it wants to know that it owns whatever Gold and Platinum and whatever else it mines there. If a young couple strikes out into the black to settle on Mars, they want to know their kids will inherit the habitat they build.

This requires legal recognition of property rights in space. The 1967 UN Outer Space Treaty prevents the United States and other nations from "national appropriation by claim of sovereignty, by means of use or occupation, or by any other means" of celestial bodies. However, this does not prevent the recognition of ownership by private citizens or corporations of extraterrestrial real estate.

It is this formal recognition of property rights that is the final missing element necessary for the settlement of space. This might be a function of the Space Guard, or another entity entirely. This recognition wouldn't imply American sovereignty over the property involved, just a recognition of the fact that a claim of ownership is valid. The recognition could and should be extended to non-Americans who go out and settle space, as well.

A mechanism in place for the recognition of property rights would allow corporate investors a way to get a return on their investment, and would provide collateral for financing for groups of settlers to set up their settlements. This in turn would lead to infrastructure improvements on Earth, in orbit, and at the various destinations, and enable further waves of settlement. Without property rights, investment will remain a trickle. With the recognition of property rights, the investment - and space settlement - will turn into a flood.
Posted by Ed at 6/02/2011 03:30:00 AM 8 comments:
Email ThisBlogThis!Share to TwitterShare to FacebookShare to Pinterest
Newer Posts Older Posts Home
Subscribe to: Posts (Atom)